I’ve written before on this blog and in this zine of the creative block I experienced upon becoming a mother.  People have always said that having children changes you, but I didn’t expect that I would have to fight to keep my identity as a writer just because I had a baby.   It used to be easy to put words to paper, and I thought it would always be easy.  I’m a different person because I had to decide to keep creating myself as a writer.

One of my favorite local artists, Haley Bonar, spoke of her transition to motherhood in this interview:

“She’s a really amazing baby, and she’s so sweet and smart, and I do everything because of her — including that time I have to myself. I use it very constructively, and I write songs way more than I did before I had a baby — which sounds insane — and I’m so inspired by it, because there’s so much joy and so much pain and so much everything that goes into that first year. Everyone that has a kid goes through that, and it’s not anything new, but you kind of grieve yourself a little bit, and you have to get over that, and you become the most strong and powerful and confident version of yourself, because you are essentially caring for this other person. Yeah, motherhood is amazing.”

I can relate to that.  It is pretty amazing, and so is Ms. Bonar’s music.  Here is a video of a song from Golder:

A portion of purchases made from Amazon.com links on this site benefit Proper Noun Blog.  Thanks for your support!

A couple of Mother’s Days ago, I wrote my story as part of a writing class for moms.

We were supposed to explore what motherhood has meant to us and how we have changed since becoming mothers.  What started in that class eventually became a zine, Will There Be Smoking? (and other questions), that covered the usual mom stuff along with what was personal to me–the creative block that plagued early motherhood for me and my step away from the religion of my youth. 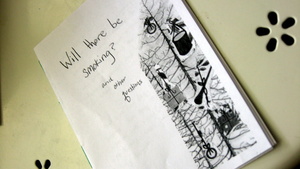 This Mother’s Day, I am particularly grateful.  The past four years have meant many changes for my family, and we are happier for them.

Do you know a mom interested in exploring doubt?  Why not buy my zine?  It makes a great gift. :)

August 1st marks the beginning of Get Ready for Kindergarten Month, which I blogged about for my employer’s blog, but it is also the start of World Breastfeeding Week.

In support of breastfeeding mothers around the world, I’d like to point out a couple of picture books that depict breastfeeding.  Despite breastfeeding becoming more and more mainstream in the United States, it is still pretty rare to see it in books for children.

George Ancona’s Come and Eat! is back in print as of this month.  The book isn’t about breastfeeding–it is about different foods eaten around the world–but the first photograph shows a nursing mother with her baby.  All babies start out drinking milk from their mother, it says.  From there, we travel the world in photographs that feature food in all its variety.  What a fun way to explore diversity with kids! 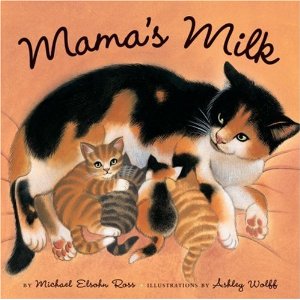 Mama’s Milk by Michael Elsohn Ross is the most direct look at breastfeeding I’ve seen in picture book form.  It really is a celebration of breastfeeding pairs in the animal world.  It begins with a human mother and baby, and as we turn the pages we see pigs, horses, and other animals nursing their young.  This is a great opportunity to remind kids of one thing that we have in common with other animals.  As the Publisher’s Weekly review put it, it is “an ode to all things maternal.”

I’ve compiled a short list of the picture books I’ve found that show breastfeeding here.  Please feel free to share any others you’ve found. I’d love to add them to my list!

They say motherhood changes you. “They” say a lot of things, but they seem to have this one right.

It isn’t like it was totally unexpected.  I had read Deborah Copaken Kogan’s memoir of going from hard boiled photojournalist on the frontlines of news to a woman all but completely immersed in the “mommy wars.”  And I’d read Alice Flaherty’s The Midnight Disease, which includes a candid discussion of her post-partum hypergraphia. I felt like I knew the risks.

(Do you ever really know the risks?)

My risks turned out to hit very close to my heart.*  For one–this is perhaps the least life changing–it altered my perspective on the books I read.  Children’s books had been my chosen career for years before I had a child, but once I became a mother, the stories had a new life.  I was not only in the young protagonist’s perspective, but I also keenly felt the mom’s point of view even if it wasn’t strongly present in the story.  Teen novels, in particular, often delve into mother-daughter relationships in ways that can be hard for me to read.

Bitter End by Jennifer Brown didn’t even get into mother-daughter drama, and I still struggled with it.  For those not familiar with the book, it is the story of a teen girl in an abusive relationship.  As I read, I kept thinking how unrealistic it was. She’s a smart girl with strong friendships. It wouldn’t happen to her. Or, at least, it wouldn’t happen that quickly.  Eventually, I had to admit to myself that it wasn’t that the book was unrealistic.  I didn’t want it to be real. 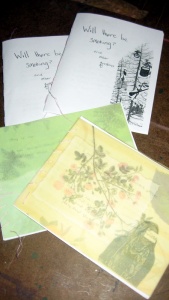 Books were the least of the changes though.  I wrote about some of the other changes in a zine (pictured right with another zine) called Will There Be Smoking? and other questions.  I’ll be selling this zine and others tonight at the second installment of a summer music series called Genrebeast, which brings together a diverse lineup of musicians.

If my writing isn’t enough to entice your attendance tonight, there will also be The Idle Hands, 2012, Dewi Sant, and FDR.

If you can’t catch the show tonight, I will be participating the the Twin Cities Zine Fest in September. Be sure to mark your calendar.

*I am not remotely implying that motherhood isn’t worth it. It is.  The zine actually focuses on what was a difficult but very positive change.

My introduction to mindfulness meditation came through the mail.  I opened a package from the Library Journal offices in New York to find my latest review assignment: Mindful Motherhood by Cassandra Vieten.  I was only vaguely familiar with meditation, and the word “mindfulness” was new to me.  This was my perfect introduction to these ideas because it was very secular and scientific, which helped me to have an open mind. It was nearly two years ago that I reviewed Mindful Motherhood, and I have yet to really embrace a meditation practice, though I have found the principle of mindfulness–the definition repeated throughout the book is “awareness of the moment without judging it as good or bad”–to be extremely helpful.

This weekend my family went to an open house at Moe Body Works to support a friend who is a yoga and meditation teacher there.  In addition to snacks and tea, the open house featured several demonstrations of some of the services offered at Moe Body Works.  We didn’t get there early enough for the intro to Qigong, but the Acro-Yoga demo was very, very cool.  As one of the yoga teachers was “flying” upside-down, Ladybug whispered to me, “This is cool.”

Later, the meditation primer was probably less “cool” to her, but we really enjoyed it.  First we experienced two minutes of silence.  The time went fast, and Ladybug was mostly quiet during it, which helped us have confidence that she could handle being there with us during the primer.  Next we spent five minutes in silent meditation.  This was significantly more challenging.  Ladybug spent about a minute sitting quietly in position then she built a pattern with the orange sitting pillows that weren’t being used.  It was a long five minutes, but I’m really glad we all experienced it.  For one thing, my partner and I have a renewed sense of wanting to make a meditation practice part of our lives.  For another, I liked that Ladybug was there to see us modeling meditation for her and even to participate as she was able.

It reminded me of the Montessori “Silence Game,” which challenges children to stay quiet until their names are called as a way of teaching self discipline and awareness to children ages 2 to 6. How to Raise an Amazing Child the Montessori Way says, “At first, younger children may not be able to remain still and silent for more than 30 seconds, but gradually they will develop the ability to relax, listen, and appreciate the silence.”  I think this will be a good place for us to start.

When we got home, I picked Susan K. Greenland’s The Mindful Child off my shelf.  I’d read it some months ago but I hadn’t tried any of the activities/meditations with Ladybug,.  The book encourages parents to start using the principles of mindfulness even with preschoolers to help them “connect to themselves (who do I feel? think? see?) to others (what do they feel? think? see?), and maybe to something greater than themselves.”  Sounds like it’s right in line with the principles of sensory awareness in Montessori education.  Actually, several of the activities in The Mindful Child work as variations of Montessori activities (sorting dried beans with a blindfold, for example).  What I really like about Greenland’s book, though, is the flexibility.  She writes, “practice what is true for you.”  That may include art or movement or music.  And that’s okay.  Just keep practicing.  Sounds like something a mom would say. 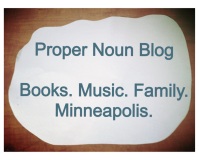